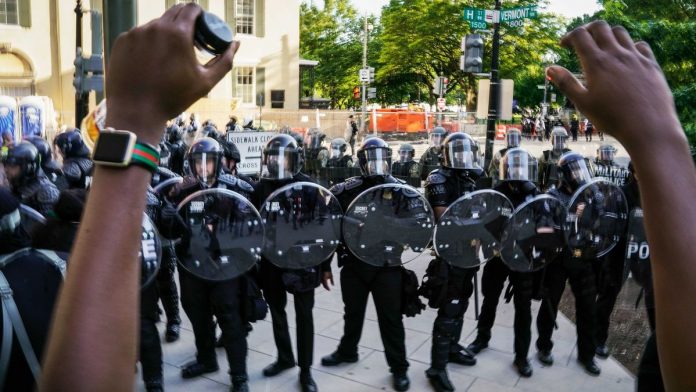 Surveillance footage around the shop showed no signs of aggression or resistance from George Floyd throughout the scene. Despite this, within minutes, George Floyd was seen on the ground, with a police officer’s knee on his neck. The officer, Derek Chauvin, held his knee right on Floyd’s windpipe, choking him. He kept pleading that he couldn’t breathe. This was all while onlookers shouted and asked with him to let Floyd go. The entire crime was on video and after inaction by the government has led to nationwide protests.

The scene in America right now is not of a revolution, but solely of a protest beginning. The world has seen many such protests, such movements. Peaceful demonstrations, riots, strikes give birth to a revolution. The people of America shall not go back till unjust police receive the justice they deserve. And while we support their movement, and their solidarity, it is time we had a glance into our own country.

India: Not a Stranger to Police Brutality.

In its history, India has never been a stranger to it. In its pre-independence era, we saw it in its most terrifying form. The police then was a disciplinarian body for the British. The Jallianwala Bagh massacre, though now considered the darkest moments in colonial history, was also an act of police brutality. However, this didn’t seem to change with India’s independence. The police have always been the authority of the powerful over the masses. In 1966, Pravir Chandra Bhanj Deo, the first Oriya ruler, was killed by the police, along with others.

You could say that India has had its fair share of police brutality to experience. And yet, unlike the U.S, India refuses to show solidarity against the Indian Police Force? What influences people to acknowledge the police as a superior force? Does this passivity mean that we shall never be able to hold police accountable for their heinous actions?

Also read: How To Prepare A CV For The Job Of Your Dreams.

History Repeats Itself: The Policing Ideology Is The Same Everywhere.

When looked at closely, USA’s Black Lives Matter Movement and India’s Anti-CAA protests do not have much in common. One protested the death of an individual and the recurring act of police brutality. The other opposed a bill of the government. Yet, it is often in these situations that we must remind ourselves. We have more scope of catching prey when looked at from a bird’s eye view. The movements necessarily were for the same cause, protection of human rights of a specific section or class of people. They saw massive turnouts of youth for peaceful and riotous protests. However, the one thing they both noted was the absolute power wielded in the hands of the police. In both situations, police had free reign to treat the youth as hostile parties.

2019 saw the proposal of the Citizenship Amendment Act in the Lower House of the Parliament. The bill sought to revoke the rights of citizens who had no ancestry to the country of India. This included students from the ages twenty and then above. While this bill came into the Lower House, the government did face a lot of flak. However, all hell seemed to break loose when the NRC bill released itself in quick succession. Singularly, both bills appeared to have good intentions. However, the implications of both of them together seemed to target the Muslim community of the country.

Due to the central government’s pre-existing bias against the Muslim community, this seemed to people as an act of discrimination. And youth and adults all across the country got onto the streets to protest the bills, citing them unconstitutional.

While this was cruel to the community, the final blow came with the excessive force used by police officers. It was mainly in the Jamia Milia Islamia Attack. The police at Jamia Milia Islamia attacked both peaceful protestors and students who were not protesting, using excessive force. The confrontation took place on the 15th of December, where police forcefully detained thousands of peaceful demonstrators. Police beat them with batons and tear gas mercilessly. The actions prompted countrywide protests from universities, political and celebrity figures alike.

Also read: Paatal Lok – The Answers Are Not What You Think They Are

Why Does No One Bat An Eye?

The incident at Jamia Milia Islamia was but one in a series of police brutality crimes against the general public. However, there was no action. There have been no further checks on the police force and their reasons for using excessive force. The Vice-chancellor of the university claims to have filed an FIR against the Delhi Police. However, nothing as such has happened yet. And yet, after the two weeks of initial outrage, we noticed that everything went back to supposed normalcy. Why?

This de-escalation originates from the ingrained mentality of the Indian population. Due to constant indoctrination, through movies, TV shows, the country believes that the police force can do no wrong. The police are an institution to protect our citizens. However, the recent polarization of the country has changed things. And as we see in Bollywood movies, the police beating up a person who is ‘bad’ is ‘cool’. In a society that has been witness to such brutality for over three decades now, it is normal for us to show no reaction.

Make A Change To The Power The Police Wields.

Any authority, when left unchecked, can get out of control. It stays true, especially to institutions that have a higher amount of power than wielded by the general population. It is our duty as the citizens of the country to take back the control in our hands. Sign petitions, donate funds and resources to disadvantaged communities. Speak out against police brutality. Ask questions and educate yourselves. Despite it being a community with bias, we have the power to change how the police treats us.

And just as in the US, if you are on the safer side of the revolution, understand your privilege. Protect your brothers and sisters that face the threat of police brutality daily.