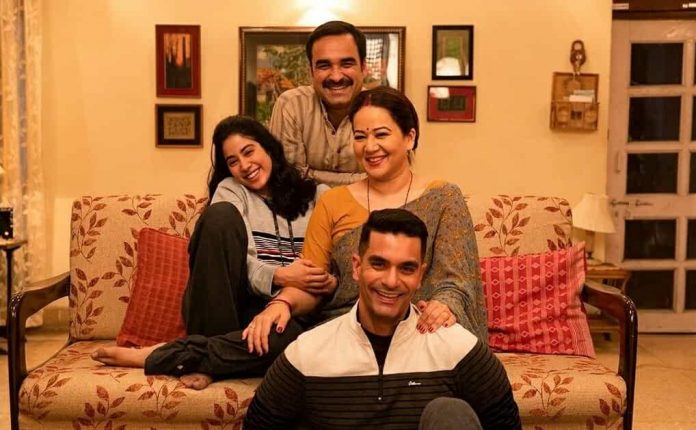 Gunjan Saxena. Sigh. I have always been very skeptical of biopics. The depiction of an actual life on screen is the same as the portrayal of a book into a movie. It is never quite perfect. And it cannot be. A movie of 2 and a half hours cannot depict a person’s entire life, while also maintaining the same brilliance they exude. Some movies do manage to capture it quite well, but no one does come quite close. And often, in these high expectations I find myself disappointed heavily by the final output.

And Gunjan Saxena does it too. For it’s most part I believe that a theatre execution would have given a better reaction than the Netflix way. There are action scenes, albeit a little subdued, which in the dolby atmos era can actually have you on the edge of your seat. But, as it cannot be helped, we can’t really hold it against them. And with that, I present to you the first look of Gunjan Saxena – The Kargil Girl.

The story of Gunjan Saxena has essentially been divided into three parts. Her as a child, as a young adult and then as an officer. Gunjan Saxena and her childhood obsession with planes and piloting remind me a lot of Kalpana Chawla. Two women who set new frontiers for Indian women in the skies in their own ways. The story shows how her obsession blossoms into an unrelenting ambition.

In the same misguided dreams that we sometimes have, we see Gunjan applying for a flying class right after passing her 10th boards. As the criteria had gone up by the time she was applying, she is forced to complete her 12th grade too. And then her college diploma. A lot of elements in the movie remind you of the struggles you go through every day as a student and then a college student on the cusp of adulting. When her dreams of joining a flying school don’t pan out, she is left dejected.

The Most Adorable Dad You Will Meet.

Enter Pankaj Tripathi. A man with a way around words, Pankaj Tripathi’s silent support and vocal voice are Gunjan’s pillars of strength. It is empowering to see fathers like this exist too. Everything that has got to do with flying, her father supports. Everytime her mother or her brother voice an objection to her dreams, he shuts them. He doesn’t take on the role of a domineering father, and you will never see him raise his voice at anyone. The way he supports Gunjan speaks volumes for how he believes in her.

There is a moment where Gunjan’s elder brother and her father are sitting in the lawn. Gunjan’s brother takes this moment to comment on how easy his dad is being on Gunjan. He believes that Gunjan’s father is giving her too much leeway even in situations that could potentially be unsafe for her. While a misogynistic view, you can understand that the army has been built for a force not including women and this reflects in what Gunjan’s brother expresses. And what I seem to get from the dad is this. He knows the world. He knows how harsh it is to women, how unfair. And he knows that he doesn’t need to add to the struggle and that it would be better for him to support her. My favourite moment is when he chooses not to offer an explanation to his son.

A Textbook Story on Gender Equality At The Workplace.

Even today, with some groundbreaking advancements in the workplace, the world still works against women in a lot of ways. War has always been seen as a man’s playground. And even today, in 2020 there are only 1700 women in the entirety of the Indian Air Force. Gunjan Saxena is a movie that talks about the first one. The story is interesting, and exciting for any feminist out there. However, the acting is honestly sub-par. As observed from numerous memes and the movie itself, Jhanvi Kapoor has one expression throughout the movie and it is frankly very disheartening. I still rmemeber fondly of the times when my family would sit together to watch the latest Sridevi movie. Her pure excitement and zeal for a movie was what drove it in the first place. It was disappointing to not see this in her daughter.

A lot of the movie deals with the sexism that women, and more importantly women soldiers used to face on a daily basis in a primarily male workplace. And while some sexism is expected as no organization is ever truly without it, the movie tends to exaggerate on it. Having never grown up in an army or defense background, I truly don’t have an idea as to the type of treatment women in the force experience. The hardships and struggles are a mystery. But after hearing of Gunjan Saxena’s own vocal support for the movie, it leads me to believe that a lot of it might be true.

However, the blatant and obvious comments by fellow officers in a show of disgustingly clear misogyny is hard to stomach. You ask yourself if this is what she really had to go through? Did she really have that outburst in front of everyone? Did she really not face more problems from her colleagues later on from that particular outburst. These questions remain unanswered as the movie zooms through to the final part of the movie: The Kargil War.

One of the major reasons why Gunjan Saxena was praised so much was not just because she was the first Indian Air Force Officer. No, there was also one other woman. What makes Gunjan so special because she was the first female Air Force Officer to participate in war. Especially the Kargil War. She had actively performed more than 900 sorties, helping across supplies and retrieving officers, injured and dead alike. Since Gunjan, gender equality in the defenses has seen a massive rise, and yet we have a long way to go. And when served with examples like Gunjan Saxena, we are inspired to continue our fight and win. Gunjan Saxena: The Kargil Girl is a one time watch and I’d suggest that you simply avoid Jhanvi Kapoor’s expression and you’ll be fine.