The requirements of customers have constantly evolved over time. Mobile has become the master tool and people expect to complete their work quickly and simply wherever and whenever they need. They want work every work to be finished over phone.

Adobe Acrobat DC which is essentially the pro version of Acrobat and Acrobat Reader users can now access PDFs they have stored on Dropbox directly from this app and edit them. Any changes they make to these files no matter whether that’s on the web, desktop or in the mobile apps are automatically synced back to Dropbox. This integration also enables collaborative editing of PDF files stored on Dropbox. Adobe will work with Dropbox as their first file sync and share partner. Dropbox will help Adobe Document Cloud customers around the world be more productive with the documents at the center of their daily lives. 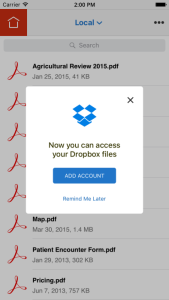 Many Business firms have already adopted Dropbox as their storage device, it would be an intelligent step by Adobe to make an integration to Dropbox instead of trying to get all of its Document Cloud users  adopt to yet another storage service just for PDF files. Document Cloud is Adobe’s eSign Service not necessarily file storage and  Adobe is open to partnering with other partners too.

Adobe is introducing a new tool for designing signature workflows, the ability to build  all new custom apps for automating certain business steps like onboarding new hires or finalizing sales contracts. The company now allows its users to comply with the stricter signing requirements in EU and launching two new data centers for Document Cloud one in  Ireland and the other Germany by the end of the year to get closer to these users.

Document Cloud’s eSigning solution features an updated mobile app for enterprises that lets business manage to access to the app through tools like Android for work. Employees can also use this app to take a photo of their signature once and then reuse it to sign all documents for future use.

The company also announced a couple of new partners including Workday, Salesforce and Ariba which have integrated Adobe signature workflow into their apps.