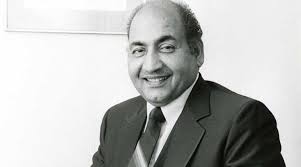 31st July 1980, was the tragic date in the history of indian Music Industry, when the King of Magical voice- Mohammad Rafi left this world. Rafi was widely considered as one of the stupendous and the most influential singers of the Indian Subcontinent. Rafi had an astounding talent of versatility. His numbers had a large amount of variety from fast peppy numbers to patriotic songs, sad numbers to highly romantic songs, Qawwalis to Ghazals and Bhajans to classical songs. He won a National Film Award and six Filmfare Awards for his magnificent work. He was honoured with Padma Shri Award by the Indian Government , in 1967.

Born in a Muslim family, Rafi was the second eldest of six brothers. “Pheeko” was his pet name. He developed his interest in music by impersonating the chants of a Fakir in the streets of his native village Kotla Sultan Singh initially. Rafi’s father, Haji Ali Mohammad ran a men’s salon in Noor Mohalla in Bhati Gate, after they moved to Lahore . 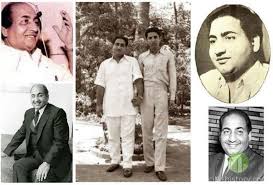 Ustad Abdul Wahid Khan, Pandith Jiwan Lal Mattoo and Firoz Nizami were The Gurus of Rafi, in classical music. The legendary singer gave his first performance at the tender age of 13, in Lahore, featuring K.L Saigal. Rafi made his debut as a playback singer at Lahore, from the song,”Soniye Nee, Heeriye Nee” with Zeenat Begum in a Punjabi Movie ‘ GUL BALOCH ‘. From the film Gaon Ki Gori, he made his debut in Hindi films as a playback singer. 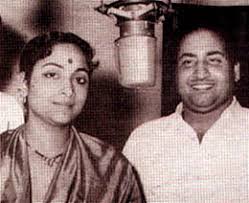 One of his cousins, Bashira Bibi, became Rafi’s first wife. Later, Bibi’s parents got killed during the riots of the partition of India. She couldn’t endure this agony and decided to shift to Lahore , this disagreement ended up in destroying their marriage and eventually they got separated. Later, he took vows with Bilquis Bano. 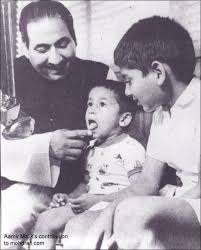 Rafi had four sons and three daughters. His first son Saeed was from his first marriage.

THOSE DAYS OF STRUGGLE- 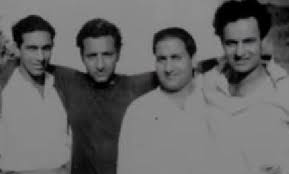 In 1944, Rafi moved to Bombay. In the highly crammed city of Bombay , he and Hameed Sahab hired a ten-by-ten feet room in the downtown of Bhendi-Bazar area. Actor-Director Nazeer , Abdur Rashid Kardar and Mehboob Khan were the producers , Rafi was introduced to by Tanvir Naqvi, a poet. Shyam Sundar was the first person to recognize the extra-ordinary talent of ‘Pheeko’ and he blessed Rafi with the opportunity to record his first song in a Hindi Film. The song was ,” Aji Dil Ho Kaabu Mein…”. After this , the Superstar of Music was on his track of giving consecutive hits.
Rafi was highly influenced by G.M Durrani’s singing style and followed it in early phase of his career , but later he evolved his own unique style. “ Humko Hanste Dekh Zamana Jalta Hai” and “khabar Kisi Ko nhi , wo Kidhar Dekhte” were the songs he sang with Durrani. 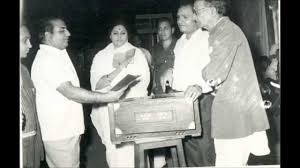 Mr. Rafi worked with many esteemed and established contemporary music directors and composers of that era such as- O.P Nayyar, Shankar Jaikishan, S.D Burman and Roshan , but the most notable among them were Naushad Ali. 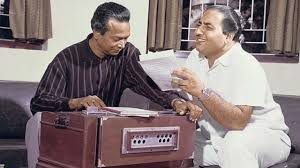 ” Hindustan Ke Hum Hain “ from the film- ‘Pehle Aap’ , was Rafi’s first song for Naushad Ali in 1944. The Naushad-Rafi alliance proved to be very beneficial for the latter as it helped him in establishing himself as a prominent playback singer in Bollywood. Rafi sang a total of 149 songs for Naushad .
Rafi sang the remarkable song “Ae Mohabbat Zindabad” , which was composed by Naushad, with a chorus of 100 singers in the film “Mughal-E-Azam”. 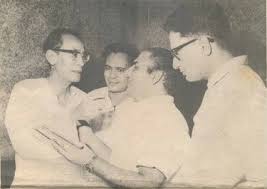 Predominantly, Rafi sang for Dev Anand and Guru Dutt, under SD Burman. Rafi was associated with Burman in 37 films. 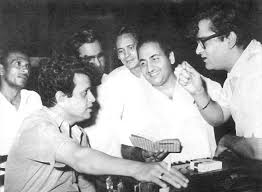 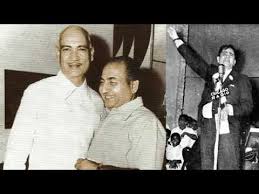 “If there had been no Mohd. Rafi, there would have been no O.P Nayyar.” said Nayyar once. Rafi and Asha Bhosle were the foremost singers for Nayyar. There were many hit melodies received by Indian Cinema under this partnership like, “Yeh Hai Bombay Meri Jaan” , “Jawaaniyan Yeh Mast Mast” , ” Yun to Humne Lakh Haseen Dekhein Hain, Tumsa Nahi Dekha”, ” Tareef karun Kya Uski Jinein Tumhe Banaya” and many more.
He worked with number of other music directors/ composers which included big names like Kalyanji Anandji , Laxmi Kant -PyareLal, Madan Mohan, Ravi and many more renowned personalities.

DEATH-
Mohammad Rafi left for the heavenly abode, exactly 38 years ago, on 31st July 1980 at 10:25 pm following a massive heart attack at an early age of 55. “Aas Paas” was the last project he was working on , at that time. According to the sources, the song “Shaam Phir Kyun Udaas Hai Dost/ Tu Kahin Aas Paas Hai Dost” was recorded just few hours before his death. It was colossal loss for the industry. His burial was one of the largest funeral processions in India, and the government declared a two-day public grief as a tribute.

Shahid rafi, his son started a ‘Mohammad Rafi Academy’ on the 30th anniversary of his death on 31 July, 2010. Allah Rakha, Mard, Coolie, Desh-Premee, Naseeb , Aas -Paas and HeeraLal- Pannalal were amongst the numerous movies which were dedicated to him after his death.