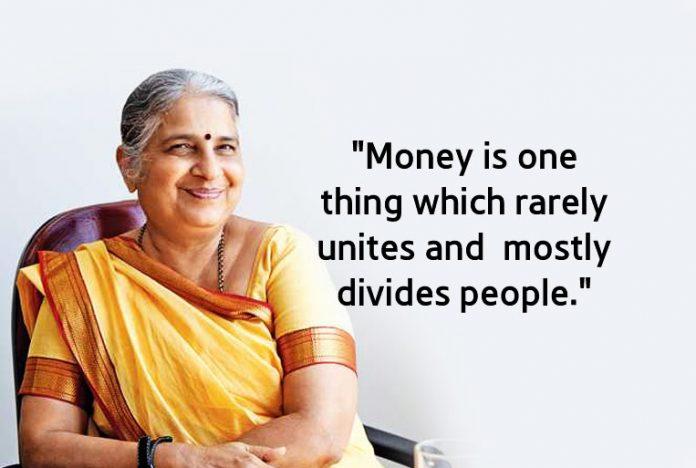 A prolific author of Kannadian and English literature, Sudha Murthy has written non-fiction, short-story collections, fiction novels, travelogues, and children’s books. Her books have been translated into different languages. She has received the R.K. Narayan Award for Literature and the Padma Shri in 2006, and the Attimabbe Award from the government of Karnataka for excellence in Kannada literature in 2011. Presently she is the chairperson of the Infosys Foundation, a renowned philanthropist, and a member of public healthcare initiatives of the Gates Foundation. She fascinates the readers with her simple and engaging writing style with an in-depth portrayal of the characters.

Below is a list of top 10 books by Sudha Murthy, that will inspire you to become a better person.

1. How I taught my grandmother to read

This book is a compilation of 25 inspiring stories from the author’s personal life experiences that portray various life lessons and forgotten values in a simple yet unique manner. The story ‘How I taught my grandmother to read’ beautifully portrays the relationship between a teacher and a student as the twelve-year author teaches her grandmother to read alphabets and words in Kannada and making her literate. From an encounter with JRD Tata to a train ride with the president, Sudha Murthy inspires the readers through her precious anecdotes.

2. The day I stopped drinking milk

The title story is about how a tribal woman from the flooded village of Odisha teaches a life-long lesson to the author after which she refrains from drinking milk forever.  This book contains a cascade of heart-touching anecdotes based on different characters that made life-changing impacts on Sudha Murthy’s life. The way she changed a village girl’s life with a ticket from ‘Bombay to Bangalore’ is worth reading and appreciating.

A tale of courage, hope, and resilience amidst the trials and tribulations of a vitiligo patient is what that frames the story of Mahashweta. Anupama’s colorful life turns completely white (Mahashweta) when she discovers a white patch on her skin. Abandoned by her husband and in-laws, she returns to her village to takes refuge, only to be turned down by people. Despite the numerous hardships life throws at her, she is determined to mend her life. This takes her to Bombay which does not remind her of leukoderma and helps her to restore respect, success, and independence.

Sudha Murthy’s ‘Dollar Bahu’ centers on a mother-in-law who makes consistent comparisons between her two daughters-in-law, one living in India and the other staying in the U.S. While the mother in law praises the one living in America, calling her as Dollar Bahu, the other daughter-in-law is not liked much by her. A trip to the U.S makes her realize that dollars don’t matter in front of love and respect given by the family.  The story portrays the fragile relationships existing in every family in a heart-rending way.

Sudha Murthy’s book ‘Wise and otherwise’ will take you on a voyage of some harsh realities of life and engages a myriad of emotions inside the reader’s mind. The book depicts the tragedy of innocent Tara, who was sold in a red-light area by her own brother for money. The author also narrates the story of a young man who abandoned his aging father in an old-age home and pretended to be a stranger to him. The book consists of a collection of 51 compelling stories that will keep the readers engaged through the author’s lucid writing style.

6. The mother I never knew

‘The mother I never knew’ comprises of two novellas about two that explores the lives of two different man Venkatesh and Mukesh who set out for a journey in search of the mother they never knew. Venkatesh discovers that his father had an extra-marital affair and goes in search of her step-mother only to find her in a pitiful condition. Meanwhile, Mukesh comes to know that he is an adopted son and travels in search of his biological mother, ultimately complicating the situation even more. The choices they must make to bring the situation to normalcy will play a great impact on their lives. Sudha Murthy explains the complexities in a simple and hopeful manner.

Who would not love a story, when grandma is the storyteller? Sudha Murthy brings back the lost memories of childhood in this book and narrates the stories from a grandma’s point of view. Anand, Krishna, Raghu, and Meena spend a beautiful summer with their grandma listening to her bag full of enthralling stories. Tales of monkeys and mice, bears and gods, kings and cheats would spring out from her bag.  A princess that turned into an onion, a queen who discovered the silk and many more are in store.

The Bakula flower is symbolic of the love between two neighbors Shrikant and Shrimati whose fragrance fades away with time. Shrimati stood as a silent pillar and assisted Shrikant to pursue his dreams after joining an IT company. The story centers around two characters Shrikant and Shrimati but mostly focusses on the sacrifices, sufferings, and choices of Shrimati to make her husband a successful person. But a meeting with her old History professor makes her rethink and analyze what she has missed in her life. Sudha Murthy realistically portrays the hardships and silent sacrifices of every homemaker in our country.

This book by Sudha Murthy is a potpourri of different emotions and personalities of common men and women of India. The author narrates ‘real’ experiences she had with several people across the country conveying the struggles and hardships they face on a daily basis. Then there are some truthful and honest people who are poor but would never bargain their principles for anything, not even money.  The title story is about an old man who is visually impaired and stays in his little Shiva temple. He refuses any help from people and is a man of his own, and a true who inspiration for readers.

10. The magic of the lost temple

‘The magic of the lost temple’ is a fictional story and revolves around the central character Nooni. Being a city girl, she finds her grandparent’s village surprisingly lagging behind time. But soon she adjusts herself to the environment and masters all kinds of work like papad-making, organizing picnics and learning to ride a bicycle, with her new-found friends. Soon things get complicated when she discovers an ancient stepwell in the midst of the forest and decides to find out the mystery behind it. Join Nooni in her exciting adventure of finding the magic of the lost temple of Karnataka.