“The Purge: Election Year” A Night of legal Mayhem

The upcoming movie “The Purge: Election Year” is an action horror sequel of The Purge franchise. The film is an American social science fiction movie.  It is the third installment in The Purge series. The sequel includes, ‘The Purge’ released in the year 2013, followed by ‘The Purge: Anarchy’ in 2014, and The Purge: Election Year releasing on July 01, 2016. The Purge movies have a kind of, creepy concept and that in real makes it so successful. The movies ‘Purge’ is a horrible event observed annually. The event Purge is a legal crime day. The entire nation is free for 12-hours to commit any sort of crime, including murder. The event apparently rids America from hatred and crime. 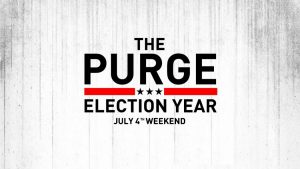 The movie happens not to be just a gore this time.  The Purge sequel has an interesting concept; the abstraction utilizes more mortality and suspense.

Just a glance on the movie, America is wracked by crime and overcrowded prisons. The government has made an absurd, but a unique strategy to the odd. The Purge, is one night when citizenry regulates free from law. The police can’t be reached. The hospital’s doesn’t suspend any sort of aid. In the horrible lawless night an innocent family falls into trouble. The family is threatened as a man escaping from a group of people trying to kill him. James Sandin lets the stranger in and hence falls into messy scenario. The movie is about how James deals with the situation and saves his family and decides the man’s fate.

The Purge Anarchy is the continuation of the same horrifying event. This time the Purge night falls heavy on a couple who are driving home when their car breaks down. A mother and daughter escaping from attackers met these couple. Meanwhile, a police man is out in the streets seeking revenge from a man who killed his son. These five people together try to survive the terrifying night in Los Angeles. 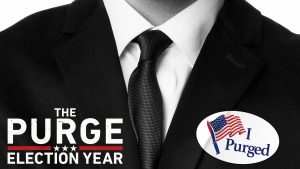 The upcoming movie is assumed to take a more political tone than the past two series. Sen. Charlene Roan lost her family in the annual Purge night. Roan managed to survive the yearly tradition of blood lust. She is a presidential candidate and is protesting against the institutionalized murder. Consequently, this pisses off the murder delighted power. Eventually, she is in hazard when the annual Purge occurs. This sequel focuses on people in authorities rather on everyday crowd that are victim to violence.

The movie’s shooting began on September 16, 2015. The shooting was done at the Woonsocket Rhode Island. The movie released date was originally set on July 04, 2016 to coincide with the independence day of United States of America. Later the date was moved to July 01, 2016, which is the weekend of the Independence Day. The third Purge installment has a more solid concept among all of the Purge incarnations. Therefore, the movie is expected to be a huge hit of the year 2016.