Durga Puja which is also referred as Durgotsava. It is a festival that is celebrated from the sixth to tenth bright lunar fortnight. Durga Puja is the festival that marks the victory of the goddess Durga over the evil buffalo Mahishasur. Thus, Durga Puja festiva; basically symbolizes the victory of Good over evil. Goddess Durga is worshipped as the destroyer of the evil and protector of her devotees. For all the Bengali Hindus, Durga Puja also known as ‘Durga Pujo’ is the biggest festival of the year.
The huge and artistic pandals, magnificent idols of goddess Durga, people dancing on the beats of ‘Dhaki’ (Drums) and not to forget the evenings surrounded with the divine tunes of goddess Durga Aarti are some of the features of every Durga Pujo celebration.

Kolkata and Delhi are two such states that are famous and well-known for Durga Pujo pandal decoration. Even though not as grand as it is in Kolkata, Mumbai has its own flavor when it comes to Durga Pujo pandals. Mumbai makes up for the lack of number of pandals with its celebrity touch and luxurious pandals. But, Mumbai cannot be missed when it comes to decoration of pandals during this auspicious festival. Over the period of years Mumbai as a city has managed to astonish its devotees with massive and beautifully themed pandals. The Bengalis, who are unable to make it Kolkata because of the same old work problems, drip themselves in these wonderfully decorated pandals. Most Bengalis who have been staying in Mumbai for a long time know about almost all the pandals, yet here is a list for others who want to seek blessings and vibes of Devi during this auspicious festival.

Every year they find more innovative ways to surprise their devotees with increasingly new and best themes of portraying the shine of Maa Durga. This Pujo pandal sees the biggest number of devotees every year. The highlight of this pandal is the ‘dhunuchi’ dance competition, adding to it the live performance by famous singers such as Javed Ali and Palash Sen. 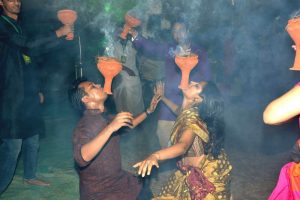 This is the best place for foodies, shopaholics and homesick Bengalis. It is believed that, this is the oldest Durga Pujo of the city. This pandal is at the Bengal club, Veer Savarkar Marg, Shivaji Park in Dadar West. Probably the best place for foodies, providing the best of Bengal platter with delicious chicken, mutton and fish chops; stuffed paranthas, mountains of rice and rivers of curries flowing on it and many more delicacies one can savor on. 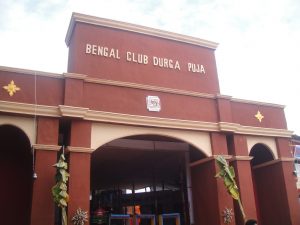 All those who have celeb-spotting on there during the pandal visits, one must definitely go to Tulip star. Balkanji bari the house of none other than the famous actresses Rani Mukherjee. The Mukherjees host the Durga Pujo here, mainly by Rani Mukherjee, Kajol and Tanuja. The pandal welcomes everyone to seek the blessings of Maa Durga. 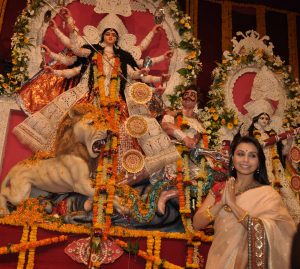 The Lokhandwala Durgotsav is celebrating its 21st successful year under the management of famous playback singer Abhijeet Bhattacharya. The celebrations in this pandal includes several cultural programs and stalls serving the yummiest foods. Art director Bijon Das Gupta has been sculpting the pandal for over seven year now. 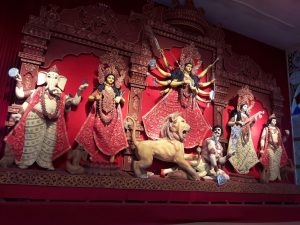 This Durga Pooja pandal is popular for its traditional ‘bhog’ comprising ‘Khichuri’ and ‘Labda’. You would see thousands of Bengalis and Non-Bengalis savoring the taste of this Bhog. You will be amazed to see the number of Non-Bengalis visiting the pandal. 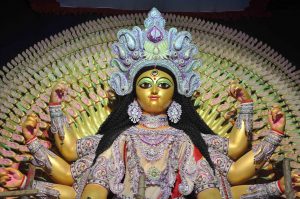 This is the only pandal in Mumbai city where you will witness the traditional Durga Puja. Don’t miss the Kumari Puja on the day of Maha Ashtami, where a young girl is worshipped as goddess with the crowds showering flowers and seeking blessings from her. Also not to forget the lip-smacking bhog. 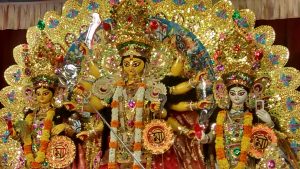 A must visit for food enthusiasts. The pandal is located near the ICL School in Vashi. Besides the pandal decoration, the food here is irrestible; but be prepared to shell some money. Any celebration is incomplete without food. You will find everything from snacks to sweets to non-vegetarian delicacies. It’s the time to savor on delicious chicken rolls, fish and mutton chops, Kolkata style biryani, Mughlai paranthas, rosogullas, sondesh and the names can go on and on. 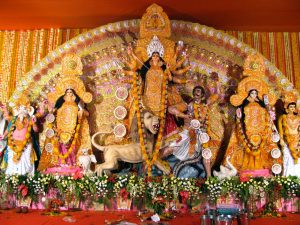