The thing about people who love their cities in which they are born is that all the while they keep trying to move out but the moment they do, the pine to get back. They feel a sudden overwhelming rush of sensations which becomes too hard to handle, somewhat similar to the feeling when you see a big tree swaying vigorously from side to side in a deadly storm. I am born and brought up in Kolkata. My extent of living in other cites goes up to spending two weeks at my maternal uncle’s house in Pune but now I know something about myself. My city lives within me more than I could ever anticipate and there is no getting out.

The day I boarded the train to Secunderabad preparing myself to go through with a rigorous journey of twenty six hours, little had I known that life has its own curious ways of sorting things out, it just needs the right moment and situation. I have been having this thought that maybe, its time for me to step out beyond the securities of my home and my family and hence I decided to appear for an exam at a reputed university in Hyderabad. I will be honest, all I had in my mind was a futile hope for a miracle that I get chosen when in fact I had zero preparation. My sole idea was to experience this historical city that I have read so much about, just undergo a change. Secunderabad had me awestruck, its broadly stretched roads, well maintained traffic, law abiding people all of it gave me an eerie feeling of discomfort. By that time I had already started to miss the easy going nature of Kolkata. It was a Sunday and there was not a single young face in the neighborhood where I was staying just casually taking a stroll or enjoying themselves over a late evening brew. I know I am being somewhat irrational taking into consideration those points which mean nothing or matter very little and will be otherwise considered ways of degeneration for a metropolitan but I really am not looking for justification here. One thing that I inherited from Kolkata is to feel good about myself without other’s consent. Hyderabad was turning out to be too good for me, I found myself staring blankly at the roads below out of my hotel’s room while a ticking clock kept notifying me of an impending disaster I know not what. I felt like a misfit, I was unable to keep up with the speed and I had to get back my sanity. 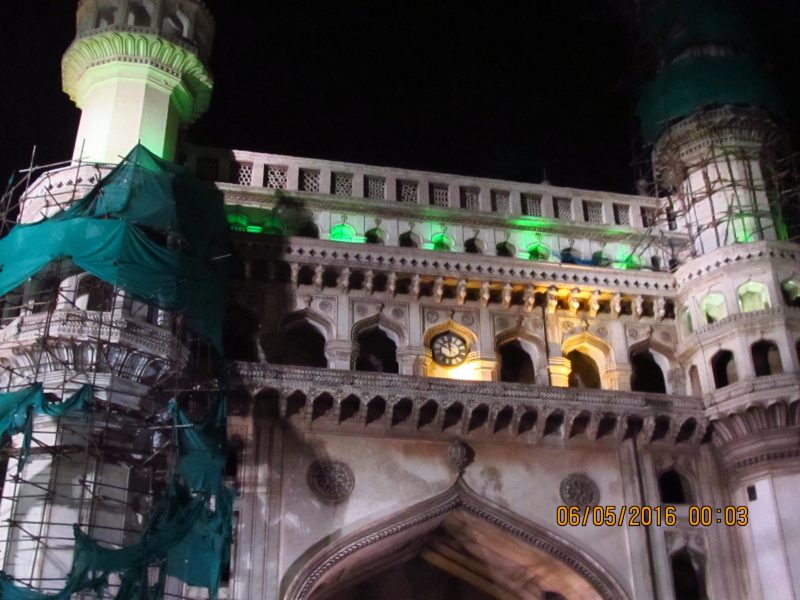 “no one will be willing to go madam, old Hyderabad so late at night” the words of my hotel’s manager left me crestfallen. I guess he sensed my turmoil and the nest thing I heard from him was, “I could ask my personal driver to take you if you want, just for an hour”. All of a sudden a found a little piece of Kolkata in that lounge of my hotel. As I stood speechless in front of him he smiled at me and said, “ye sahar bura nahi hain madam, kho hui cheez mil jati hain agar dhundna chaho toh”. These were the exact words I once used to describe Kolkata to a friend of mine who had come from the United States and now, this insignificant manager of an insignificant hotel were using them to make me feel at home. Later that night I found myself standing in front of Charminar, that clock on it displayed ten minutes to twelve. It felt good. The man who drove me there, Nazeer, asked me why did I want to visit it so late. My explanation to him was, “I am stuck in between my past and future nazeer bhai, I need to embrace my present for a moment here”. That night time stood still in front of that huge building, for a while I forgot the wheezing traffic or the shouts of the people around, the surrounding became a blur. I was taken back to that time of Quli Qutub Shah and with my eyes closed I observed the building grow in front of me, workers intricately designing and working their marvels upon the stones. I wondered was it possible that maybe, while inspecting the work in progress, the great ruler contemplated the idea that one day, centuries later his beloved minar was going to save a lost soul. There was a man with a cart in front of me selling some sweets. There were gulabjamuns and some other things I don’t remember the names now.

He handed over a plate to me full of sweets without me asking and he smiled at me. As I tasted the cream of the gulabjamun melt in my mouth, my heart was filled with a sensation sweeter” than all the desserts of the world put together. “where are you from didi?” “Kolkata”. “you are bangali??” “you too?” “my family lives in Barasat. I have been staying here for the last five years now. This city gets to you doesn’t it, just allow it some time to settle”. His words came flying at me as the police carrived with the gong of twelve and urging the people to wrap up their businesses and as I saw him walk away with his little cart and a little of Kolkata, home, that he left for me.

A Man’s Guide to Fragrance: How to Choose and Wear Cologne