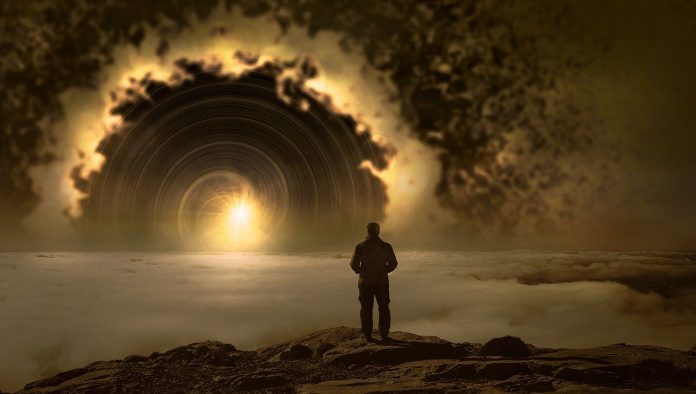 Black holes are neutron stars with such a gravitational force that even light cannot escape from it.

A black hole is a mathematical solution. A neutron star over the critical mass gets so dense that it forms larger and larger time dilation relative to the outside universe thus we get to see what happens on short time scales.

But what causes it to emit radiation?

Hey friends! here I am with a new article – Hawking Radiation, theorized by Stephen Hawking in 1974 (a small effort to remember him).

Hawking Radiation! The phenomenon that has been baffling physicists since its discovery. The process that describes the death of a black hole or the process by which a black hole “emits” radiation. The very fact that radiations are coming from a black hole is in itself mind blowing!
The thought came into existence after it was mathematically proved that black holes have an entropy. The presence of entropy signified that it must have a temperature. And as we know from the laws of thermodynamics, it meant that it must be radiating energy and thus loosing mass.

The equation that describes the entropy of a black hole is:

The larger a black hole is lesser would be its absolute temperature. The temperature and mass follow the following relation:

If this process takes place near the event horizon, chances are one of the particles, the one with negative energy will get sucked up and the other with positive energy will escape into the Universe as a real particle. As the negative mass gets inside the black hole it reduces some of its mass. For an observer seeing it from outside, the positive particle would appear as radiation and it would appear that the black hole is losing mass. Thus, the black hole will lose matter, particle by particle and gradually evaporate with time.

From the principle of conservation of mass, and relativity, we know that mass and energy are inter convertible. For a reminder, the equation:

This equation tells the energy possessed by an object of relative mass m, moving with the speed of light or the similar nature of mass and energy. The particles that are formed near the event horizon, are formed using the energy from a black hole’s gravitational potential energy. Thus, making it loose energy and eventually mass.

This happens incredibly slow at first. For a super massive black hole, it is really insignificant. Reasons being: A, its large event horizon; B, high suction to emission ratio and C as we have seen from the above equations that temperature is inversely proportional to the mass of a black hole. The process gets faster as the black hole becomes smaller.(The scientists at the Large Hadron Collider hope on making one such ultra-tiny micro black hole in order to study Hawking Radiation.)

When it arrives at the mass of a large asteroid, its radiating at room temperature. When it has the mass of a mountain, it radiates with about the heat of our sun. And in the last seconds of its life, the black hole radiates away with the energy of billions of nuclear bombs in a huge explosion. The wavelength emitted is same as the size of a black hole. As size gets smaller, the wavelength also gets smaller. The largest of the black holes are the coldest and the smallest ones are the hottest. BUT, this process is incredibly slow.

The last of the largest of the black holes may take a googol year to evaporate (hundred zeroes after 1). This period is so long that when the last black hole radiates away, nobody will be around to witness it. The universe would have become uninhabitable, long before then!

A proper explanation to the Hawking Radiation needs a quantum theory of gravity, that is, the unification of gravitation and quantum mechanics – the two giants of modern physics. We are working towards it but haven’t achieved it yet. We have better hopes from future.

So, this was all for today. Hope you found it informative. Will be back soon. Till then thank you very much.

Is ZOOM As Safe As It Claims To Be? We Break It Down.

The Future of Construction