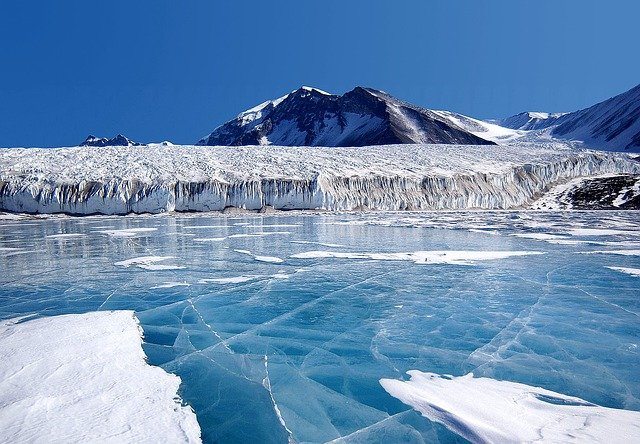 Pollution across the world has been increasing at a higher rate day by day. The emission of greenhouse gases has already reached maximum levels, if these greenhouse gas emissions continue at the present rate, The surface melting of Antarctic ice shelves  may be doubled by 2050 and surpass intensities associated with ice shelf collapse by 2100.

Ice shelves are floating extensions of the massive land-based ice sheets. Collapse of the ice shelves would cause a rapid melt of the Antarctic ice sheets this in turn releases vast amounts of Earth’s freshwater stores into the ocean. By 2100 this would add up to 40 cm to sea levels, melt rate would continue to accelerate until 2300, and sea levels would continue to rise after that for thousands of years. While the melting or breakup of floating ice shelves does not directly raise sea level, these ice shelves do have a door stop effect. They slow the flow of ice from glaciers and ice sheets into the ocean, where it melts and raises sea levels.

Recent scientific results illustrate just how rapidly melting in Antarctica can intensify in a warming climate. Increasing of earth’s temperature of 1.5 to 2 degrees Celsius above current levels could lead to an unstoppable rise in the sea level that would last for thousands of years. These estimates are most conservative and not considering the polar amplification which is the extra warming occurring at the poles.

The last time Earth has experienced CO2 levels similar to todays was 3 million years ago and at that time sea levels at that time were a staggering 20 m higher. To study melting evolution over time and to predict future ice sheet melting along the entire Antarctic coastline. The scientists combined satellite observations of ice surface melting with climate model simulations under different scenarios of intermediate and high levels of greenhouse gas emissions until the year 2100. According to the recent analysis global sea levels could rise over current levels by about 30 to 100 cm by 2100 which depends on emission scenarios with the main contributors being expansion of the warming oceans and melting of Greenland ice sheet and other land glaciers in polar region.

These results indicate a strong potential for the doubling of Antarctica wide ice sheet surface melting by 2050 under emissions scenario. The good news is that their research suggests it’s not too late to stop this, if we’re prepared to take tough action to reduce greenhouse emissions.