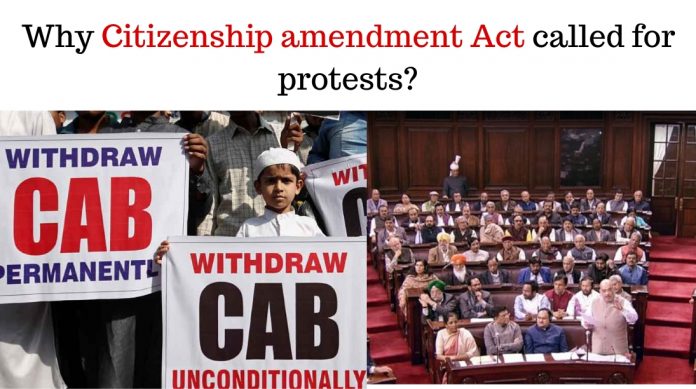 The country is seeing a disastrous time. With fires and demonstrations all over the country, there have also been several cases of violent outbursts. There is rage and violence around us, but before condemning or supporting this new provision to Indian Constitution, it is necessary as a citizen to look into what this Act has to stay before taking a stand. Sound knowledge about the Act is necessary in order to take a logical stand and prevent any violent mishaps, which have been regular news for the past few days. This winter session of the Parliament saw another controversial Bill take the form of an Act after Article 370 came into play!

What does the Citizenship Amendment Act say?

The Citizenship Amendment Bill of 2019 has been made into an Act in the last session of the Parliament. This controversial Bill has triggered turmoil throughout the nation. CAA avails first track citizenship provisions to Hindu, Sikh, Parsi, Buddhist, and Christian immigrants from neighboring countries of Bangladesh, Pakistan, and Afghanistan who have been residing in India without any documentation. The Bill seeks to amend the definition of illegal immigration by ensuring citizenship to the above-mentioned communities if they are settled in India for a period of six years. This Amendment bill excludes Muslims indirectly from the provision by stating that the first track citizenship is available to the persecuted section of Hindu, Parsi, Buddhist, Parsi, Sikh, and Christian community.

This Citizenship Act of 1955, states that in order to be a legal citizen of India apart from the being by birth, a person needs to reside here for 11 years out of 14 years. The new amendment by the Modi government reduces the erstwhile 11 years to six years for the aforementioned communities. Precisely, this legislation gives citizenship to people who are “forced or compelled to seek shelter in India due to persecution on the grounds of religion.”

Who are the beneficiaries of Citizenship Amendment Act ?

If we take a close look at this Act, it implies that people from Hindu, Sikh, Buddhist, Parsi, and Christian communities from Bangladesh, Pakistan, and Afghanistan are liable to Indian citizenship if they have resided here from before December 31, 2014. This clearly suggests that these communities can be Indian citizens even though they lack the required document. Moreover, they will not be deported if they do not have valid documents.

Further, the Bill has reduced the term of residing in India from 11 years to six years for the beneficiaries.

Exclusions from the Citizenship Amendment Act

This Bill turned Act clearly demarcates some exclusions to these provisions. The tribal belts of Tripura, Assam, Meghalaya, and Mizoram are kept away from the purview of this Act, as they are included in the Sixth Schedule of the Constitution. Areas falling under the Inner Limit notified by the Bengal Eastern Frontier Regulation of 1873 is also excluded. This demarcation clearly keeps Arunachal Pradesh, Mizoram, and Nagaland out of the ambit where this Act will be implemented.

Why this Act called for protests?

The protests which have been raging throughout the country are in different contexts. The entire northeast rise in revolt as they fear that this inclusion of refugees into their territory will lead to a change of demography. They feel threatened by the influx of people that this Act will initiate completely changing the uniqueness of the place to which the originally belong. Especially, the state of Assam is seen to violently respond against this Act. Why is this so? Although a specific part of the state is exempted from the Act, the majority is covered by CAA. The indigenous residents of Assam, fear that the illegal Hindu immigrant residing in the state will threaten the linguistic and cultural identity unique to Assam.

Other parts of mainland India are revolting since this Act very cleverly excludes the Muslim community from the list. The Constitution of India upholds a non-communal approach where different communities are claimed to live in peace and harmony. The Citizenship Amendment Act of 2019 tends to harm the constitutional ethos of the country, creating a bifurcation in terms of the privileges as an Indian citizen.

Government’s logic behind the Act

The government put forward a logic that they are protecting the rights of the minority groups who have escaped persecution from the neighboring Muslim majority nations. However, there seems some discrepancy in logic, as there are other nations and communities that are not catered to by this Act. This Act does not take into its purview all minority sections of the society as it claims to be. For instance, the Rohingya Muslims and Hindus who faced persecution in Burma, Shia community and Ahmedia Muslim sect facing persecution in Pakistan, or the Christian and Hindu Tamils who are discriminated in neighboring Sri Lanka. What the government has to say on their part is that the Muslims can seek refuge in Islam dominated nations but have avoided the other queries.

The Oppositions Opinion on CAB

The Opposition (not merely the political ones) clearly sees this action of the central government as marginalizing the Muslim community. The Act put into implementation welcomes other communities as a part of India while infringing the Muslim community. It clearly indicates that the Muslim section of our society is degraded to the level of second class citizens giving preferential privileges to the other communities.

Personal Opinion on the nationwide protests

From intellectuals to the student community, from political oppositions to religious leaders, there has been a worldwide protest in the country against CAA. However, recent news showcases violent outbursts with the burning and destruction of public properties. This form of revolt needs to stop in order to demonstrate the real need of the time. People need to peacefully act as creating a crisis by destructing roads, and railways will not lead to a fruitful end.

We don’t need to be silent but maintain basic decency in order to make a voice that matters. Different universities across the country with the collaboration of students and teachers have risen in revolts. Time has come that we take up actions thinking rationally such that basic humanity is not lost in the process. Law and order need to prevail in order to uphold the integrity of the Constitution and the country.

In my Opinion, Opposition to any cause that might create conflict is necessary. But there stands a chance to adopt peaceful means, for demonstrating the need of the hour. If all roads start leading to violence, we will be losing out on the ideologies of Gandhi, Bose, and other patriots who lead the nation to independence!

Satyavati as a Femme Fatale in The Mahabharata