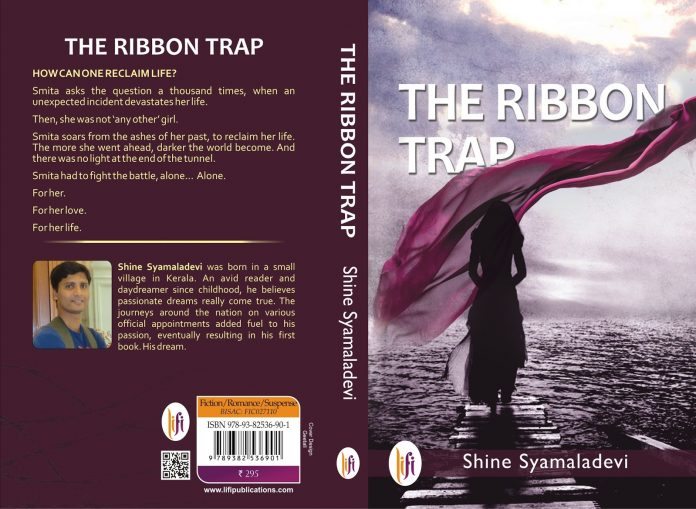 The ribbon trap explores the world of a young, intelligent and aspirant girl, Smita. Smita proves to be the phoenix who rises on it own ashes. Smita had only one dream and that was to marry her lover Krishnaprem, an orphan. She knew she could reach the goal only through achieving a position in society, As her parents could be a strong opposition to their marriage. She worked very hard and as a result she was made the assitant collector after passing the examination. She had just set her foot in the reality of dreams. Life, for her, had turned out the way she wanted. But life is never a bed of roses. Some terrible surprises awaited her in the new city, Coimbatore. An unfortunate event turned the world upside down for her. She was acknowledged as a criminal who had assasinated the prime minister, whose security arrangements had been done by her.Because of the incessant tortured that were inflicted upon her, She loses her sanity, her physical beauty and everything that made her Smita. She lost interest in life and wanted to die. It was doctor Matthew whose tireless efforts brought her back to life. She knew what next she had to do. She knew that finding the real culprits is the new aim in life. She sets out to search for the real conspirers behind the prime minister’s assasination. The author has portrayed political world in detail. The hidden filth of politics is evident in every episode. The ugly game of thrones and positive image costed a girl her everything, and this is the story all about.

Reviewer’s Views- According to me The author has created an ambience of suspence which is maintained throughout the play. The story on the whole is predictable but the investigation is very uncertain and it lures the reader to stick to itself. The story commences like any bollywood movie and the word picture created by the author helps the readers to visualise the whole scene. The story is one of a kind and I would consider it as one of the best I have ever read if I avoid the setbacks.

Set backs– 1. After recovering from trauma, Smita was released and she was aquitted free despite being the supreme suspect for the assasination of the prime minister.
2. Krishnaprem, Smita’s fiance joins in the investigation much later saying that he had been following them ever since they started it. Smita and Rasheed were on an important mission where they did not notice, and discussed everything in front of people without maintaining their secrecy. It was that easy for Krishnaprem to follow their steps, and it would have been equally easy for her rivals. But they somehow resorted different means.