1. 3rd Most common drink in the world-

Beer is the world’s most widely consumed alcoholic beverage, and the third-most popular drink overall, after water and tea. All I know is that I am contributing a lot to this fact.

YES, the truth is that beer is as all-natural as orange juice or milk. Beer doesn’t need preservatives because it has alcohol and hops, both of which are natural preservatives. Beer is only “processed” in the sense that bread is: It is cooked and fermented, then filtered and packaged. 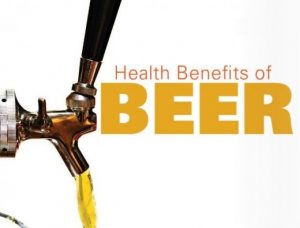 Beer not only has no cholesterol, it can actually improve the cholesterol in your body. In fact, drinking beer regularly and moderately will tilt your HDL/LDL cholesterol ratios the right way. According to some studies, as little as one beer a day can boost your HDL by up to 4 per cent.

4. It can help prevent kidney stones

A study conducted in Finland established that moderate daily consumption of beer can reduce the risk of developing kidney stones by 40%. This health benefit is attributed to beer’s high water content (about 93%) that helps flush harmful toxins out of the body and keep the kidneys working properly. Also, compounds in hops used in brewing help slow the release of calcium from bones, which in turn prevents build-up of lost calcium in the kidney in the form of stones. 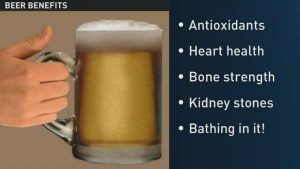 5. It can help treat dandruff-

Another interesting fact about beer is that it is considered one of the best natural treatments for dandruff. This particular health benefit of beer is attributed to its high yeast and vitamin B content levels. Just rinse your hair with a bottle of beer two to three times a week to get rid of dandruff and make your hair extra soft and shine.

6. It can help lower risk of diabetes-

This is another remarkable benefit of moderate beer consumption. The alcohol content in beer increases insulin sensitivity, which helps prevent diabetes. Moreover, beer is a good source of soluble fibre that plays an important role in the healthy diet of people suffering from diabetes.

In general, alcohol intake is associated with bigger waists, because when you drink alcohol, the liver burns alcohol instead of fat. Any kind of calories, whether from alcohol, sugary beverages, or oversized portions of food -can increase belly fat. However, alcohol does seem to have a particular association with fat in the midsection.

A beer a day keeps stress and heart attacks away. Moderate alcohol consumption can reduce stress and anxiety, known contributors of heart disease. Drink to that. 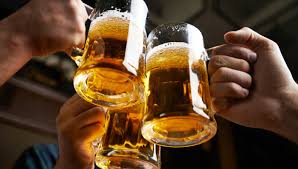 That’s all guys; I think I gave you all plenty of reasons to drink beer today. Well now I would like to share one more reason to drink beer and that is because of the glasses, yep you got me right, “PITCHERS”. Stupid huh…but what can I do, I just love them. So guys let PROST!!