“The Father of India”, Mahatma Gandhi once said, “The real Swaraj will come not by the acquisition of authority by a few, but by the acquisition of capacity by all to resist authority when abused”. He wouldn`t have visualized then that his country would have to make a law to entitle the people to know something as fundamental as seeking information about the development of the country. On 12th October 2005, a new era of the empowerment of the common man in India begins, when this “Right to Information Act” came into existence in our country.  It is applicable everywhere except the state of Jammu and Kashmir.

First, we should be able to know what information really means? Information can be defined as “any material in the form of documents and records, opinions and advice”. Information is power, and the government wants to share this power with those that are poor so that they can be enriched with this power. It is basically for this very reason that the Right to Information Act has been self-possessed for us.

What is the Right to Information Act?

The Right to Information Act is sanctioned by the honorable Parliament of India. It gives the citizens of India the access to records of the government including both the Centre and the State Government. This act applies to all parts of India be it state or Union territory, except to the state of Jammu and Kashmir, since it is enclosed under the State level law. The state of Jammu and Kashmir has its own RTI act, which is known as the “Jammu & Kashmir Right to Information Act“, which came into existence from the year 2009. 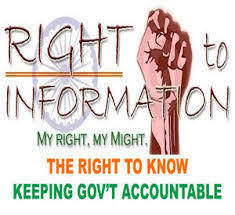 The Right to Information Act is relevant to all the constitutional authorities, including the executive, legislature, and judiciary. Any institution or body established or constituted by an act of Parliament or a state legislature comes under this RTI Act of 2005. Under the furnishing of this Act, any Indian citizen may request information from a ‘public authority’. These public authorities are required to reply within a period of thirty days.

The Right to Information Act gives the citizens the right to:-
1) Inspect work, documents, and records
2) Taking notes, extracts, or certified copies of documents or records
3) Taking certified of materials
4) Acquiring information on disks, tapes, video cassettes or in any other electronic mode or through printouts

Why is there a need for Right to Information Act?

The Supreme Court has observed that Right to Information is a part of Righ to Speech and Expression which is our Fundamental Right.

Democracy is a government for the people. The common man is the master while the government exists to secure this common man. Ours is a representative democracy. We elect our representatives, who then rule us in our name. The Government of India runs on the money paid by us, the people, in the form of taxes. Shouldn’t we have a right to question them on what decisions they take on our behalf? Right to Information Act gives the citizens the right to ask the government about it.

There is no doubt that a silent revolution in the form of Right to Information campaign is sweeping across the country. We are all aware of the corruption that has pervasive in our system. How often have we heard our elders say “it is impossible to get any work done in any government without paying bribes? God help us if we refuse to pay bribes! Unnecessary objections will be raised and we will be running around in circles!”

Hold it! Now we have an option! We don`t need to pay any bribes to any government department anymore to get our legitimate work done. The Right to Information Act give us the authority to know the status of our grievance petition and the name of the officials who have been sitting on our files. This really works wonders!

Thanks to the Right to Information Act, matters which were in cold storage for years and years have been resolved. Now electricity connections, replacement of faulty meters, rectification of faulty water bills and many other works. These works could now be done as soon as the people filed applications to know the status of their applications and the names of officials sitting on their files.

The Right to Information has redefined the relationship between the people and the government. Earlier, people had to run around government officials to get any work done in that area. Not any area! The Right to Information provides such critical information and evidence in the hands of common hand, that our bureaucrats cannot shirk their responsibility and hide in their cozy offices anymore.

This act has been used extensively by the non-governmental organizations, individuals, and even the media to extract official information that affects our day to day lives. Of course, defense secrets and strategic information cannot be made public. But if money has been spent to build a road where none exists, we have the Right to Information Act which can help us fight corruption and prevent misuse of taxpayers money.

As people become more and more aware of the Right to Information Act they can get empowered to ask questions.

“This is inevitable; it is long overdue, and the public has a fundamental right to have access to information”.