More
Facebook
Twitter
Pinterest
WhatsApp
Linkedin
ReddIt
Tumblr
When I was a little girl, visiting my grandmother had always been an adventure for me she lived far away from my house but it didn’t stop me to peddle my cycle towards her abode which was certainly heavenly for me. I used to go all the way down to the village to meet her. I was bought up there, I was spoiled, fed and loved there. She was my real life, fairy god mother.
As humans, we have a way of growing up and forgetting the care that our parents and grandparents give us. We argue with them, break their hearts by some words that we don’t mean but in the heat of the moment just say it. I remember clearly it was a very hot time of the day when my mother came up to me and asked me to go and visit my Grammy. I instantly refused as  I had “way better” things to do but mother was as stubborn as me. I caved and decide to take my old bicycle for a ride to old Grammy’s place. 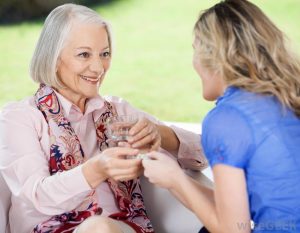 My Grammy had gotten really old now. She had started forgetting things and repeating the words she said. It had started to get on my nerves. That day after just sitting in the chair for almost an hour without uttering a single word I had asked her to make me some special Kheer of hers that I really liked. It was something I ate on all my special days. I even gave away Grammy’s special Kajoo Kheer as a return gift on my sweet sixteen. She was really ill a day before that but that woman still got up. Funny what love can make you do. When she got back with a glass bowl in her hand. I saw the color orange instead of white. She had made a Halwa rather than her Kajoo Kheer which somehow was unacceptable. I remember screaming at her.
Yelling and saying “This isn’t Kheer at least do something right Grammy.” I pushed the bowl aside and stormed out of the room. While riding my bicycle I suddenly came to my senses and thought about what I did. In the heat of the moment I forgot she had gotten old and weak. I screamed at her and left her all alone. That women didn’t even say a word to defend herself. I know I had broken her heart and she was shattered by the way I behaved I know she would’ve cried a lot after I left. When I was alone in my room my conscience woke up and I started regretting every word I said to her. I went to bed, pictured her in my mind and decided to visit her, first thing tomorrow morning.
When I reached my ‘Nani Ghar’ I saw her sitting there on the sofa that my late grandfather had bought her as her birthday gift. My grand father was a romantic even at the age of 65. She loved that sofa and sat on it to celebrate every emotion of hers. She was facing the fire wall and I couldn’t see her face, so I stood at the door and greeted her. There was a silence because she hadn’t replied. I thought to myself she might still be angry about yesterdays incident and now she is giving me the “silent treatment”. I decided to go on and keep apologizing. ” I know you are hurt Grammy I didn’t mean any of those things I said. I am sorry.” I said. Still there was no reply.
I told her ” I know you are furious right now but you don’t have to be silent . Go ahead scold me. I deserve that”. “But please don’t be silent I want to hear your voice.” “I want to hear your old lullaby that you used to sing to me and also the way you used to praise me “.”Speak to me and forgive me please“. 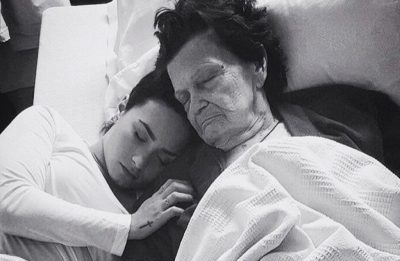 I am sorry I spoke to you that way. “I shouldn’t have talked to my beloved Grammy in such a manner. I am really sorry.” I apologized and apologized and she didn’t even utter a word. I told her all the things she had taught me. To love the ordinary things in life, to cry when a puppy dies. To laugh when you stumble down a hill and to never hurt anyone. As tears rolled down my cheek while remembering my childhood  I ran to her chair and saw her eyes open with still a tiny tear inside it.
It seemed like an ocean had found a new place to reside in. She wasn’t blinking or breathing. It took me more than a minute to realize that she had gone. All this time I was talking to myself. Saying things -that I should’ve said much earlier- to my own self. She hadn’t heard a single word I said . I was shattered.
No matter what people tell me I know I was the reason she had gone. she had died from the worst possible thing. A Heartbreak.
I never got to say I am  sorry. I said things that I shouldn’t have. I regret that but I also know she was women with a big heart. she would’ve forgiven me that’s the only reason I have forgiven myself. I still remember her . I even inherited her special Kajoo Kheer recipe along with her chair which now soaks in all my emotions.
I LOVE YOU GRAMMY.