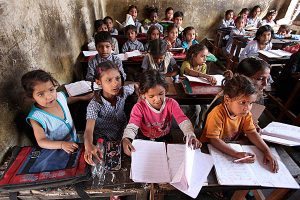 Education is a never-ending system of which once an individual becomes a part, he or she remains a part of it for a lifetime because education is not confined to learning to read and write, it is far beyond the two as it consists of acquiring knowledge and experience over a period of time that makes one capable of a more comprehensive understanding of the nuances of life leading to a better and more productive life. The benefits of education make it a necessity for all which in turn necessitates its accessibility to all, but fulfillment of the purpose of education which is to cast humans into efficient and competent individuals has been obstructed by its commercialization, privatization and saffronisation.
There is a profusion of colleges and universities in recent times, most of these educational institutions are owned by political leaders and businessmen who establish such institutions to form a basis of local power and acquire large sums of money and profit from these institutions but these colleges and universities are either very costly due to their privatization and hence only the rich can afford them or they are in shambles with poor infrastructure and untrained teaching staff. The University Grants Commission (UGC) and the state are compelled to allow for the establishment of such institutions due to pressure from powerful personalities even though there is no evidence of the need and quality of these institutions. If the UGC and other accreditation authorities try to close down these institutions or press them to improve their standards then it is opposed by their powerful owners. Hence quality of education is going down the drain due to its privatization and commercialization, most of these institutions provide degrees in engineering, MBA and MBBS, hence quality of engineers, doctors and management students being produced is poor and their number is high with little job opportunities for them, this has led to unemployment and underemployment and burgeoning IT and BPO sectors in India. Commercialization has also had an adverse impact on the quality of teachers emerging in the current times. Earlier the teachers were characterized by willingness and the zeal to shape amateur men and women into competent and proficient individuals but now a days teachers are indifferent to the overall growth and development of the students, they are only concerned with earning money by way of teaching, thereby now the educational institutions are producing a class of inept and incompetent individuals.
A major problem and threat to the Indian education system is its saffronisation where in the education system is being moulded to promote the Hindu culture and religion, this will have serious repercussions as this is against the essence of education and it distorts the truth and misrepresents the facts and sows the seeds of communalism and discrimination. With all the challenges faced by the Indian education system the government needs to act. Necessary programmes and policies need to be introduced and their implementation and execution should be carefully monitored, more investments should be made in all sectors of education on part of the government and fundings should not be mishandled for which government should ensure strict supervision of funds. An improvement in education system is a prerequisite for India’s development and success and this is possible only if the government dissociates itself from saffronisation of education and discourages its privatization and commercialization.