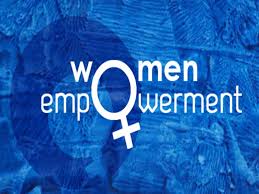 “To call a woman the weaker sex is a libel; it is a man’s injustice to woman. If by strength it is meant moral power then a woman is immeasurably man’s superior. Has she not more self-sacrificing, has she not great powers of endurance, has she not greater courage? Without her man could not be. If non- violence is the law of our being, the future is with women.”

The position of women in India has diverse in different periods and in different classes, religion, and ethnic group. The pre-independence era has witnessed the exploitation of women in and outside their home. The Gandhian period and even prior to that is marked by the philosophies of some very brilliant social reformers and thinkers like Raja Ram Mohan Roy, Swami Dayanand Saraswati and so on who strived endlessly to bring about a change in the condition of Indian women so that they become “better wives” and “better mothers”.

Gandhi Ji, however, saw women not as ‘objects of reform’ but as ‘self-conscious objects’ and he included them among the ‘masses’ in a most natural way. Women participated in mass movements led by him and this made a big breakthrough in Indian women’s lives for times to come. The Mahatma said that women have been suppressed under custom and law for which man was responsible and in the shaping of which she had no hand. Regulation of social demeanor must be drafted by cooperative co-operation and consultation. Women have been taught to regard themselves as slaves of men. They must realize their full status and play their part as equals of men. 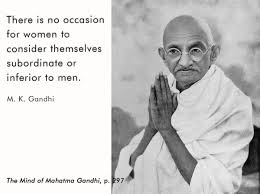 Women, according to Gandhi, are a personification of ‘ahimsa’ which means love and infinite capacity for suffering. In the words of Gandhi: “The women in India tore down the purdah and came forward to work for the nation. They saw the country demanded something more than their looking after their homes. They manufactured contraband salt; they picketed foreign cloth shops; etc. They marched to jails and they sustained lathi blows as few men did.”

Gandhi on Equality of Sexes

Gandhi strongly emphasized that there should be no inequality in the wages paid to men and women. He could very well foresee that the success of the Swadeshi movement was possible only if women spun yarn and weave cloth in large numbers. He felt that women should not feel any legal disability which is not suffered by men. 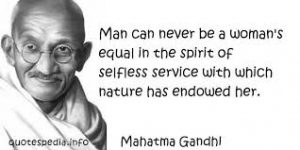 Women, said Gandhi, have to be taught that she has rights as well as duties, and, they have to learn the art of under control. According to Gandhi, a woman is the companion of man, gifted with equal mental capacities. She thereby has the right to participate in the very minutest detail in the activities of man and has an equal right to freedom and liberty with him. But, she is entitled to a supreme place in her own “domain” or sphere of activity. Therefore both boys, as well as girls, should be educated but it is only the primary education for the two sexes that have much in common. As far as the higher education is concerned, important differences would exist. ”As nature has made men and women different, it is necessary to maintain a difference between the education of two. True, they are equal in life, but their functions differ. It is women’s right to rule the home. Man is the master outside.” Gandhi, therefore, felt that there must be provision for separate arrangements for the education of girls after their attaining a certain age. They should be taught necessary domestic tasks. Hence, Gandhi always felt that while both are fundamentally one, it is also equally true that in the ‘form’ there is a vital difference between the two.

“I am uncompromising in the matter of woman’s rights. In my opinion, she should labor under no legal disability not suffered by man. I should treat daughters and sons on an equal footing of perfect equality.” – Mahatma Gandhi.”

Delhi Pollution: An increasing threat to the nation.

3 Books/Stories Every Girl/Woman Must Read

TOP 5 VASTU SHASTRA TIPS TO BRING WEALTH AND HEALTH INTO...